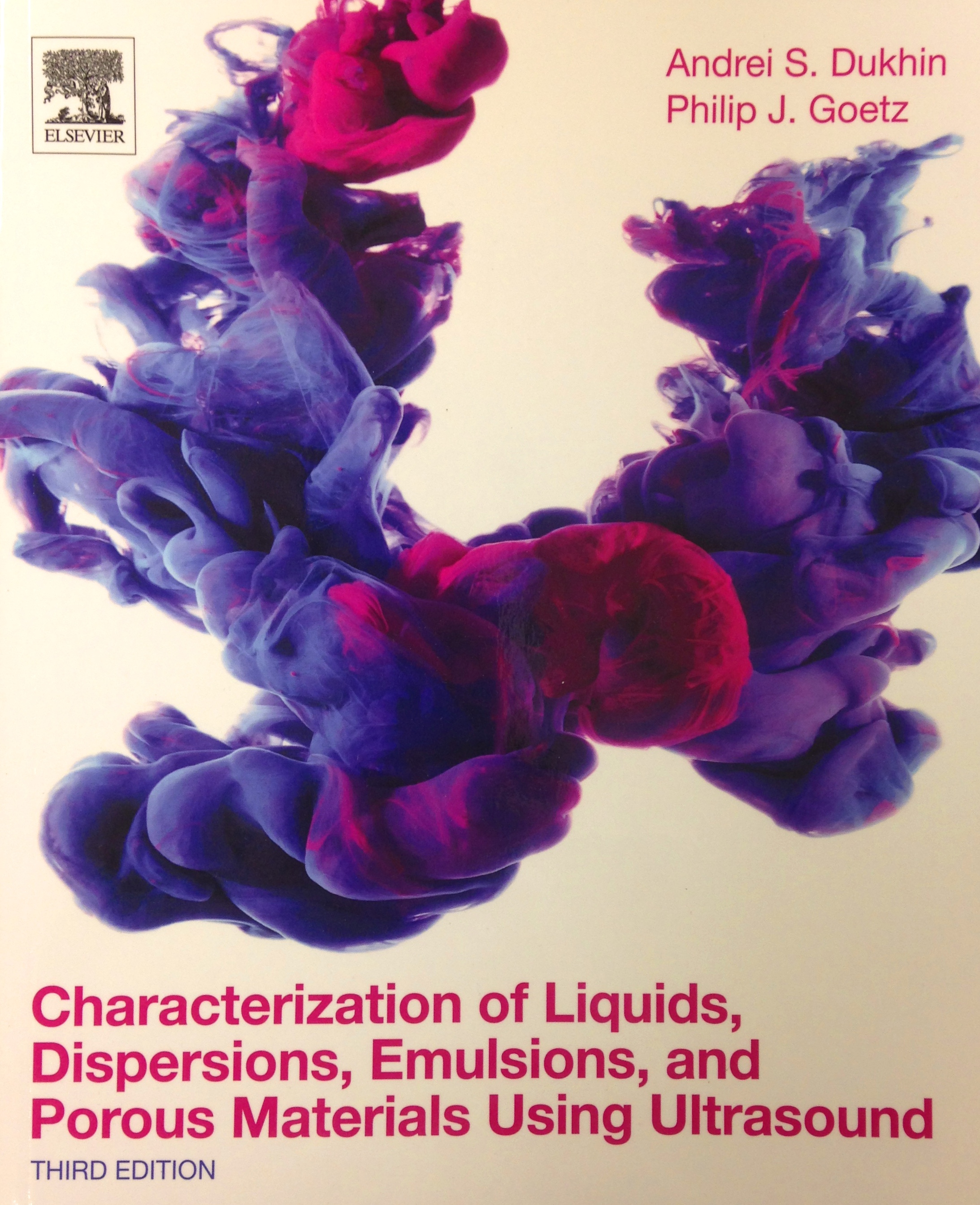 ﻿PREFACE for the Third Edition.

There have been already 2 Editions of this book, Edition 1 (2002), Edition 2 (2010). Both these editions are out of print, but there is still ongoing interest to the subjects addressed in this book. We have decided to make the new Edition (3) instead of just printing additional copies of the Edition 2 for the few reasons.

Whereas theoretical background of these methods remains practically unchanged, many important papers have been published since last Edition publication, mostly on the applications of these methods. We are aware of 77 papers published by just users of our instruments. We have published several more papers by our own, bringing total number to 33. However, it is our instruments users’ contribution dominates sections that we have added to this new Edition. As a result Edition 3 exceeds previous Edition 2 by 25% and about 100 new references in bibliography...Read more

There is completely new Chapter 14 that is entirely dedicated to the peculiar applications developed by users of these ultrasound based instruments. There have been substantial additions made to other application Chapters (8-13) as well. On the other hand, Chapters that represent fundamentals of these methods remain practically unchanged, except Chapter 6 on the experimental verification of the methods. We have added 3 more verification studies to this chapter: one for nano-particles sizing, another one for micron size particle sizing, and one for elevated temperatures.

In the previous Edition Preface we mentioned that that Edition marked beginning of these ultrasound based characterization methods adulthood. Period since then brought continuous progress in the expansion of the methods. Number of groups using these technologies increased from 350 up to 600 worldwide.

Finally, I would like to express gratitude to our colleagues at Dispersion Technology: Lazlo Kovacs, Sean Parlia, Joseph Coppo, Kenneth Schwartz and my former partner, who retired five years ago but agreed to help in writing this new Edition of our book – Philip Goetz. His contribution to these new characterization methods development is enormous as a pioneer inventor and the main designer of the instruments.

﻿PREFACE for the Second Edition.

“Ultrasound for characterizing colloids” was first published in 2002. We decided to work on the second edition after two print runs were sold out and the book became unavailable. By the beginning of 2008, we gathered substantial justifications to prepare a new edition of the book instead of running an extra print of the first edition.

First of all, there were about 40 papers published by users of our instruments in various scientific journals. There was, in addition, about a dozen of our own papers and several papers published by other scientists in the field. These papers demonstrated the wide spectrum of applications for characterization methods by ultrasound..Read more

Second, we discovered promising ways of using ultrasound that were known in specific scientific areas but not to us. We didn’t mention them in the first edition and wanted to rectify the situation. One of the most striking examples was “seismoelectric current”. This electro-acoustic and electrokinetic phenomenon has been known in geology for 70 years. However, there is practically no information about it in the major books on colloid and interface science despite the fact that it can be defined as “streaming current that is non-isochoric at ultrasound frequencies”. Frenkel’s theory of this effect is the first electroacoustic theory (1944) known to us while Ivanov’s experiment is dated about the same time (1940) along with the first electroacoustic experiments by Hermans (1938). We present detailed descriptions, both theoretical and experimental, of this little known electrokinetic effect in Chapters 5 and 13.

Seismoelectric current may become important in characterizing porous bodies. It clearly offers a simple way to measure ζ-potential in pores. In addition, it offers the possible opportunity to characterize porosity and pore sizes.

Another important example of discoveries in old works is “longitudinal rheology” and a host of related applications. Interpretation of acoustic data in rheological terms opens many new ways for applying ultrasound for characterizing complex systems. Mason predicted this 50 years ago for polymer solutions. There were other enthusiasts but the lack of instruments and systematic reviews brought this field to a complete stop. We present here a review of the many works in “longitudinal viscosity” and provide some applications of our acoustic spectrometer as a “longitudinal rheometer”. One of the most important applications is the measurement of the “bulk viscosity”, an obscure second-viscosity coefficient of regular Newtonian liquids.

Another example is Passynski’s theory (1938) that relates the speed of sound with size and solvating number of ions. This theory was used by Bockris and others 40 years ago but has been since neglected. There are many talks about measuring nanoparticles with sizes down to 1 nm using dynamic light scattering. This was done many decades ago using sound speed measurements with appropriate theoretical treatments. We discuss this in the Chapter 12.

There are several other new sections in the second edition. Most of them are on applications described in Chapters 8-13 but there are some new theoretical developments discussed in Chapters 3-5 as well.

This field has become so wide-ranging in methods and applications that we begun talking more about the versatility of ultrasound for characterization purposes. This is explored in Chapter 1.

This second edition is almost twice in size and has 50% more references than the first one. In preparing the first edition, we made the statement that it “… marked the end of ultrasound’s ‘childhood’ in the field of colloids…”. This second edition marks the beginning of adulthood. The number of groups working with our instruments has increased from 100 to 350. Geography has become much more diverse. In addition to the U.S., Germany, Japan, Taiwan, China, U.K., Belgium, Finland, Singapore, South Korea, Mexico, and Canada, we have now users of our instruments in the Netherlands, Brazil, Thailand, Malaysia, India, Russia, Lithuania, Austria, Switzerland, Italy, Spain, France, Czech Republic, Columbia, Kuwait, Australia, and South Africa.

We would also like to express our gratitude to our international agents: Quantachrome GmbH (Europe), Nihon Rufuto (Japan), Horiba U.S.A., Acil Weber (Brazil), Advantage Scientific (China), and LMS (S.E. Asia). Without their dedication, we would not have been able to achieve so much in such a short period of time. They learned these new methods and now actively promote and teach them to others.

We would like also to mention the contributions from our colleagues at Dispersion Technology: Betty Rausa, Lazlo Kovacs, Ross Parrish, Kenneth Schwartz, and Arthur Sigel. By taking proper care of everyday problems and the company’s needs, they gave me [us?] time to write this second edition.

﻿PREFACE for the First Edition

The roots of this book go back twenty years. In the early 1980’s Philip Goetz, then President of Pen Kem, Inc., was looking for new ways to characterize -potential, especially in concentrated suspensions. His scientific consultants, Bruce Marlow, Hemant Pendse and David Fairhurst, pointed towards utilizing electroacoustic phenomena. Several years of effort resulted in the first commercial electroacoustic instrument for colloids, the PenKem-7000. In the course of their work they learned much about the potential value of ultrasound and collected a large number of papers published over the last two centuries on the use of ultrasound as a technique to characterize a diverse variety of colloids. From this it became clear that electroacoustics was only a small part of an enormous new field.

Unfortunately, by that time Pen Kem’s scientific group broke apart; Bruce Marlow died, David Fairhurst turned back to design his own electrophoretic instruments, and Hemant Pendse concentrated his efforts on the industrial on-line application of ultrasound. In order to fill the vacuum of scientific support, Philip Goetz invited me to the US motivated by my experience and links to the well established group of my father, Prof. Stanislav Dukhin, then the Head of the Theoretical Department in the Institute of Colloid Science of the Ukrainian Academy of Sciences..Read more

Whatever the reasons, I was fortunate to become involved in this exciting project of developing new techniques based on ultrasound. I was even more lucky to inherit the vast experience and scientific base created by my predecessors at Pen Kem. Their hidden contribution to this book is very substantial, and I want to express here my gratitude to them for their pioneering efforts.

It took ten years for Phil and I to reach the point when, overwhelmed with the enormous volume of collected results, we concluded the best way to summarize them for potential users was in the form of a book. There were many people who helped us during these years of development and later in writing this book. I would like to mention here several of them personally.
First of all, Vladimir Shilov helped us tremendously with the electroacoustic theory. I believe that he is the strongest theoretician alive in the field of electrokinetics and related colloidal phenomena. Although he is very well known in Europe, he is less recognized in the United States.

More recently, David Fairhurst joined us again. He brought his extensive expertise in the field of particulates, various colloids related applications and techniques; his comments were very valuable.

In our company, Dispersion Technology Inc., Ross Parrish, Manufacturing and Service Manager, and Betty Rausa, Office Manager, extended their responsibilities last year thus allowing Phil and I time to write this book. We are very grateful for their patience, reliability and understanding.

We trust that publishing this book will truly mark the end of ultrasound’s “childhood” in the field of colloids; it is no longer a “new” technique for colloids. Currently, there are more than 100 groups in the US, Germany, Japan, Taiwan, China, UK, Belgium, Finland, Singapore, South Korea, Mexico, and Canada using Dispersion Technology ultrasound based instruments. We do not know the total numbers of competitive instruments from Malvern, Matec, Colloidal Dynamics and Sympatec that are also being used in the field, but we estimate that there are over 200 groups world-wide. We strongly believe that this is only the beginning. Ultrasonics has “come of age” and we hope that you will also share this view after reading this book and learning of the many advantages ultrasound can bring to the characterization of colloid systems.